The UNCCT is committed to the transparency of and the visibility in its work. This Annual Report provides a detailed account of the work of the Centre during the course of 2019, and is supplemented by the quarterly highlight reports issued by the Centre and made available through the UNCCT website (www.un.org/uncct), where additional information is available on the Centre and individual activities carried out throughout the year. UNCCT was established in 2011 to promote international counter-terrorism cooperation and support Member States in the implementation of the Global Counter-Terrorism Strategy through a voluntary contribution of the Government of Saudi Arabia. The General Assembly welcomed the establishment and encouraged Member States to collaborate with the Centre (A/RES/66/10). In 2014, the Kingdom of Saudi Arabia donated an additional USD 100 million to UNCCT. Since its establishment, more than 30 countries have provided financial support to UNCCT and its projects. On 15 June 2017, the General Assembly established the United Nations Office of Counter-Terrorism.

As a global Centre of Excellence, UNCCT continues expanding its support to the Member States on counterterrorism, prevention and countering of violent extremism, support victims of terrorism and protection of human rights, through Global Flagship Programmes and provides expertise on some of the most critical policy work of UNOCT, including in terms of priority issues for the Member States and the Secretary-General.

(UNOCT) through resolution A/RES/71/291 and decided to transfer UNCCT along with its staff and resources to the new Office. 2019 also saw the continuation and reinforcement of three important trends reported on in earlier years. Firstly, UNCCT continues to expand cooperation with key partners both within and beyond the UN system. The Centre also continued to develop and implement activities across all its sections and pillars and collaborated closely with the rest of UNOCT, thus bringing the Member States tailored workshops and training that combine core issues such as human rights and border security and management, and strategic communications, gender, youth and cyber. 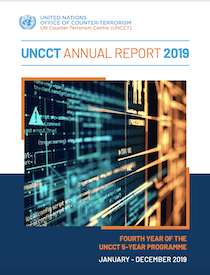