Global value chains (GVCs), which rely on and benefit from international supplier networks, have played a leading role in industrial production since the 1990s. More often than not, developing countries carry out the less productive activities within GVCs, while high value-added activities tend to be carried out in more advanced economies.1 One indication of this trend is that advanced digital production (ADP) technologies, which contribute to enhancing manufacturing firms’ productivity, especially in terms of labour, are heavily concentrated in a few industrialized economies. 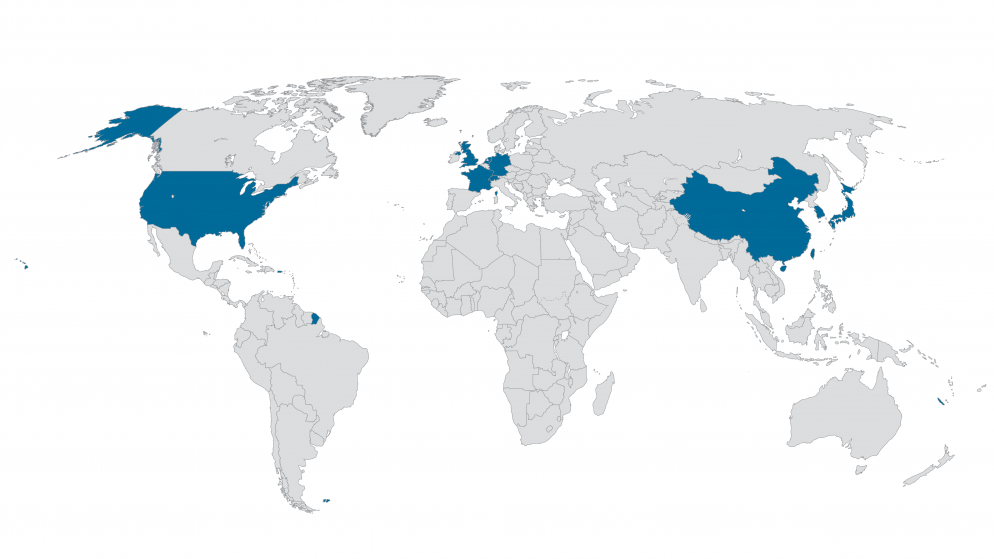 Note: The ten economies highlighted in the figure represent 90 per cent of all global patents in these technological fields and account for around 70 per cent of exports of capital goods that embody ADP technologies. Source: UNIDO Industrial Development Report 2020.

Developing economies can nonetheless benefit from the ‘digital dividend’ by adopting and adapting to technologies associated with the Fourth Industrial Revolution (4IR), which follows the three past industrial revolutions of mechanization, electrification and automation, respectively.

The adoption of ADP technologies requires an enabling environment

4IR entails new digital production technologies, including additive manufacturing (3D printing) and robots as well as new production management tools, such as data analytics and artificial intelligence. Although current adoption rates of 4IR technologies are still very low in developing economies,2 they are likely to increase over time. The rate and success of digital technology adoption is determined by both incentives, such as potential for lower costs or greater profitability, and by firms’ absorptive capacity.

The latter hinges on internal factors such as the firm’s own knowledge base and R&D investments, as well as on external factors, including the availability of a skilled and educated workforce. That is, firms endowed with greater capabilities and higher levels of human capital are, in principle, better equipped to identify and successfully adopt new technologies as these become available on the market. Economists have also identified a ‘mimicking’ effect, whereby firms engage with new technologies by imitating, or learning from, partners and competitors within their specific industry and geographic region.

Exposure to international trade and production networks can act both as an incentive and as an enabler for the adoption of ADP technologies. Participation in global production networks may make the latest technologies more readily available at a lower cost, and, as is the case with foreign direct investment (FDI), GVC participation opens opportunities for knowledge spillovers. Which specific mechanism of knowledge transfer is applied depends on value chain governance modes and the relationship between lead multinational companies (MNCs) and their suppliers.

In some cases, the MNCs may engage directly with suppliers to train workers or license technologies; in other cases, learning may occur indirectly through product specifications or feedback on quality and performance. While firms in developing countries may not be using ADP technologies just yet, GVC integration, together with internal capacity-building, is a positive indicator of their ability to adopt those technologies in the future.

UNIDO recently carried out a detailed firm-level survey in three developing countries—Ghana, Thailand and Viet Nam—to shed further light on the relationship between GVC participation and the adoption of ADP technologies.3 All three countries lag behind in terms of their capacity to adopt and apply new technologies, and only 3.2 per cent of surveyed firms were actually using ADP technologies in their production systems. 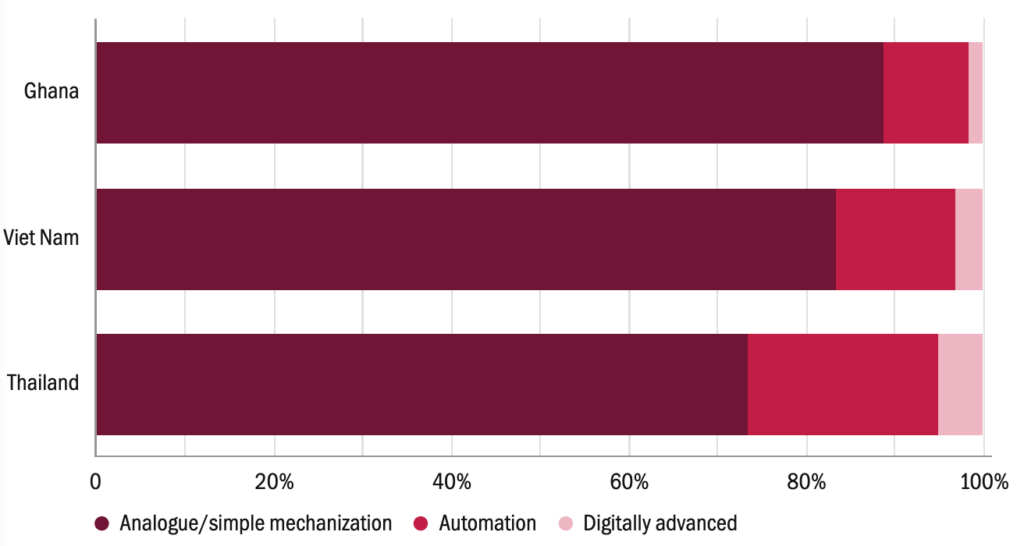 The survey results provide some important insights into the determinants of digital adoption in industrial production. One key finding is that the adoption of ADP technologies is associated with greater exposure to international trade and production networks and the accumulation of higher levels of human capital, proxied through education and skills levels. Firms that invest internally in skills and other capability-building activities are also more likely to adopt new technologies. Similarly, older firms are more prone to adopting new technologies, perhaps because they can better absorb the costs of switching to new technologies. Another interesting finding is that younger firms are more likely to be digitally ready, which suggests freedom from technological lock-in and the potential for leapfrogging, whereby latecomers avoid investments in outdated technological systems. The survey also found that ‘mimicking’ effects play a role in the adoption of new technologies, with firms learning from others within their own environments, thereby reflecting the degree of ADP technology diffusion within a firm’s own region and industrial sector.

The literature as well as UNIDO’s survey results indicate a positive relationship between GVC participation and the adoption of ADP technologies. Since the production and application of 4IR technologies remains concentrated in a small group of industrialized economies, developing countries are more likely to gain knowledge in frontier technologies through international rather than through domestic channels. Participation in GVCs can be one such international channel since it is linked to a wider diffusion of knowledge and to greater opportunities for learning and capacity development. The adoption of ADP technologies, in turn, is associated with better performance and higher labour productivity, returning a ‘digital dividend’ to those who are able to implement these technologies and their associated processes.

The results of this study suggest that the diffusion of ADP technologies in developing countries can be fostered by GVC integration, but this conclusion should be interpreted with caution. Firms with low absorptive capacity will not be able to capitalize on these advantages as they lack the knowledge and skills to identify, use and maintain the relevant technologies. While digitalization through GVC integration holds great promise for less industrialized economies, equal attention should be paid to developing local human capital by fostering knowledge creation and diffusion.

This article is based on the UNIDO IDR 2020 Background Paper ‘Does Value Chain Participation Facilitate the Adoption of Digital Technologies in Developing Countries?’ authored by Carlo Pietrobelli, Michele Delera, Elisa Calza and Alejandro Lavopa.