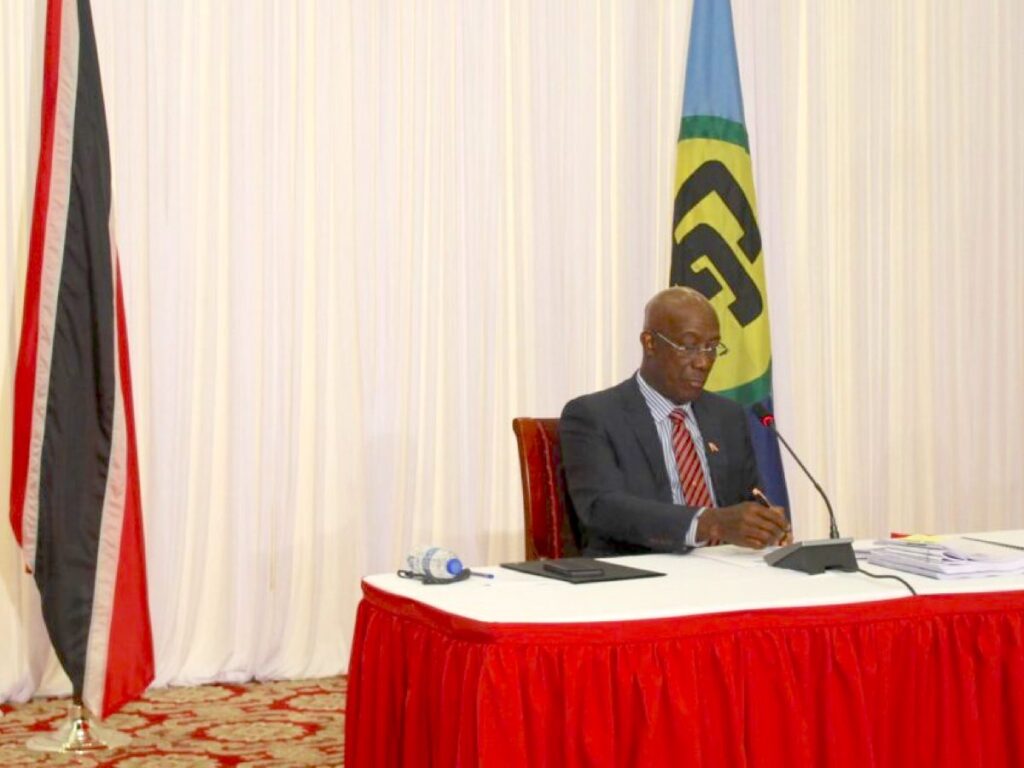 CARICOM Chair, the Honorable Dr. Keith Rowley, Prime Minister of Trinidad and Tobago as he chaired the Intersessional Meeting, 24 February 2021

The COVID-19 pandemic has served as a reminder of the importance and relevance of regionalism, multilateralism and South-South cooperation in the world today, particularly, during times of crisis. CARICOM Chairman, Dr. Keith Rowley, Prime Minister of Trinidad and Tobago made the point on Wednesday (24 February 2021) as he officiated at the opening session of the two-day, Thirty-Second Intersessional Meeting of the Conference of Heads of Government of CARICOM. The meeting was held virtually.

Unsurprisingly, the impact of the pandemic on the Region, and the availability and procurement of vaccines were central to the Chairman’s remarks, as well as in the presentations by the outgoing CARICOM Chair, Dr. the Hon. Ralph Gonsalves, Prime Minister of St. Vincent and the Grenadines, and Ambassador Irwin LaRocque, CARICOM Secretary-General.

Prime Minister Rowley said CARICOM had been “invaluable” in the fight of Member States against COVID-19. He highlighted the work of regional institutions, as well as the high level of cooperation and solidarity in the Region on the sharing of personal protective gear, and the generosity that saw the distribution of vaccines among CARICOM Member States from limited supplies that two countries received as gifts to counter a mushrooming of cases.

“Colleagues, CARICOM has been invaluable in the fight of our Member States against COVID-19. The evidence of this has been replete over the last year. The continued support provided to the Community by our regional institutions led by the Caribbean Public Health Agency (CARPHA), and the most fervent demonstrations of regional solidarity through the sharing of PPEs (Personal Protective Equipment), reagents and Test Kits and most recently, vaccines, have had significant impacts on our ability to combat the ravages of this nefarious disease.

“The generosity of the Governments of Barbados and Dominica in sharing their vaccine gifts, received from the Government of India, is particularly noteworthy and commendable. Prime Minister Mottley your pioneering role in securing the Community’s access to vaccines through the African Medical Supplies Platform (AMSP) showed great ingenuity, foresight and stamina,” Prime Minister Rowley said.

He also expressed his “sincerest appreciation” to the Governments of India and of the African Union for “their benevolence” in allowing a pathway for the Region to access much-needed vaccines. He praised the Director-General of the World Health Organisation (WHO) and his team for their continued efforts to ensure vaccine availability equity.

While he pointed to “disappointment” over vaccine availability, he said that the Community continued to anticipate that its many approaches, requests and orders would soon result in satisfying deliveries of approved vaccines for “our anxious populations”.

“Today, I also acknowledge and welcome the commitments made by the United States of America, the United Kingdom of Great Britain and Northern Ireland, France and Germany to the global mechanism, COVAX and to equitable allocation of vaccines. As we meet here now, we are all anxiously awaiting our first shipments of the life-saving vaccines from the COVAX experiment,” he said.

The Prime Minister said that the pandemic had thrown the global economy into a tailspin with very little sign of early recovery. And although CARICOM had relative success in its fight against COVID-19, the bloc was identified as one of the Caribbean’s most vulnerable to the virus especially when the effect of travel bans on tourism services were taken into consideration.

“This sector is crucial to the survival of many of our Member States and Associate Members,” Prime Minister Rowley pointed out.

The Trinidad and Tobago Prime Minister indicated that the “perilous pandemic” had disrupted every segment of society as the Region continued to deal with traditional threats to development such as climate change, external economic shocks, blacklisting and de-risking of financial institutions.

He told delegates that COVID-19 had highlighted the vulnerabilities of the Caribbean Community and other Small Island Developing States (SIDS), and called for vulnerability indices that took into account the impact climate change, natural disasters and global pandemic had on their development.

“This will permit Small Island Developing States access to much needed concessional financing to aid our recovery and build our resilience,” he said.

Over the two-days, Heads of Government will discuss the preparations for the roll-out of COVID-19 vaccines. They will examine the status of implementation of the CARICOM Single Market and Economy (CSME), and any outstanding issues which need to be resolved to ensure that full benefits from the CSME are realised. The Meeting will also seek to advance the regional agenda on Food and Nutrition Security. Heads of Government will deliberate on the framework for a joint Tourism Policy for CARICOM as well as CARICOM’s relations with the new United States Administration. Reparations and Regional Security are also matters on which the Heads of Government will deliberate.