By Hu Yuwei and Huang Lanlan

With the G7 group urged by civil society organizations to share COVID-19 vaccine manufacturing technology and provide financial support to the COVID-19 Vaccines Global Access initiative, China is issuing more licenses to its global partners to locally produce Chinese-developed vaccines with at least nine countries across four continents launching production lines for domestic manufacturing, according to calculations. Experts said it will be further scaled up upon the WHO’s approval for more vaccine candidates.

China has supported the first batch of overseas production bases of COVID-19 vaccines in Latin America (Brazil), the Middle East (The United Arab Emirates) and Africa (Egypt), three developing regions that are still struggling from the serious coronavirus but so far have not received much vaccine support from the West.

Licensing enables overseas partners to secure fast access to vaccines, and sometimes boosts them to become a supply center in their own region and beyond, proof of China’s commitment in promoting vaccine accessibility, analysts said, while also warning of potential risks and barriers.

Hubs in Africa, LatAm and Mid-East 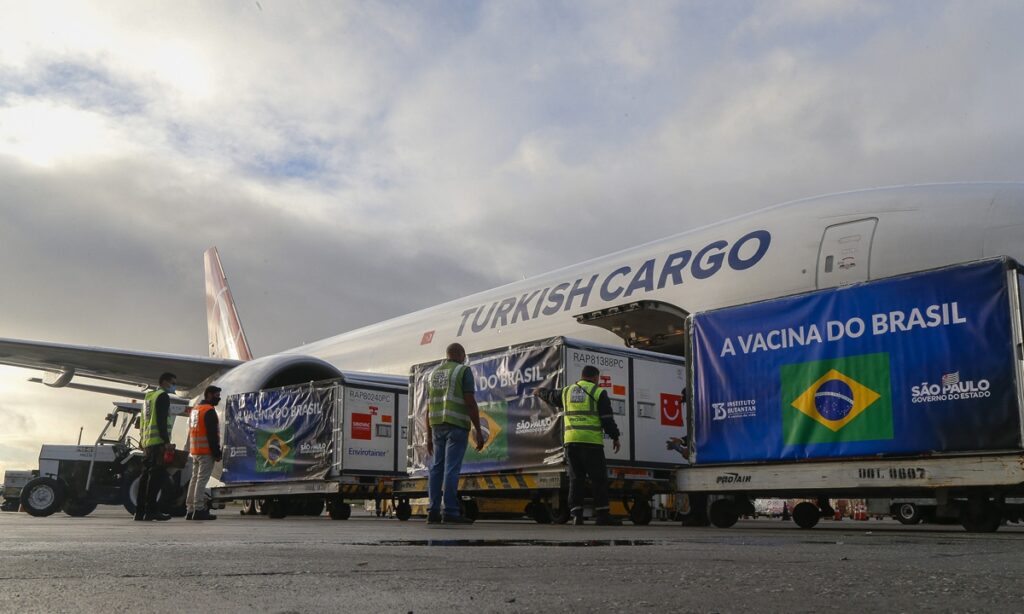 The UAE Ambassador to China Ali Obaid Al Dhaheri told the Global Times Thursday that its locally produced vaccines will be delivered around the world through the WHO’s COVAX plan, noting that “people in the UAE, from the leadership to the [general public], have great trust in Sinopharm’s vaccine and highly accept it.

Branded “Hayat-Vax (‘life’ in Arabic),” the annual production capacity of the WHO-approved vaccine in the UAE is expected to eventually reach 200 million doses, with three filling production lines and five automatic packaging lines. It currently can produce at least 2 million doses per month. “This is in keeping with the ambition for the UAE to be a new regional distribution hub for the vaccine,” said the UAE Ambassador at a media conference in Shanghai on Thursday.

Located at the Port of Abu Dhabi, the COVID-19 logistics and warehousing center is becoming an important global vaccine warehousing and distribution center especially for countries in Africa, the Middle East and West Asia. More than 50 percent of vaccines in the warehouse come from China, the China Central Television reported in March.

With the support of the agreement, Health Minister Hala Zayed said on May 9 that Egypt hoped to become a center for manufacturing the vaccine, either for local use or export to African countries.‬‬‬‬ Amid a spiraling number of confirmed virus cases, in May Egypt received 500,000 doses of China’s Sinopharm vaccine and 1.7 million doses of the AstraZeneca COVID-19 vaccine through the COVAX initiative, its Health Ministry reported.

COVAX remains the primary way for Africa to secure doses at present, in addition to doses donated from China, Russia and India. In Africa, 17 countries have adopted vaccines developed by China whereas only three countries have access to the US-made vaccines, according to statistics by the Africa Data Hub. 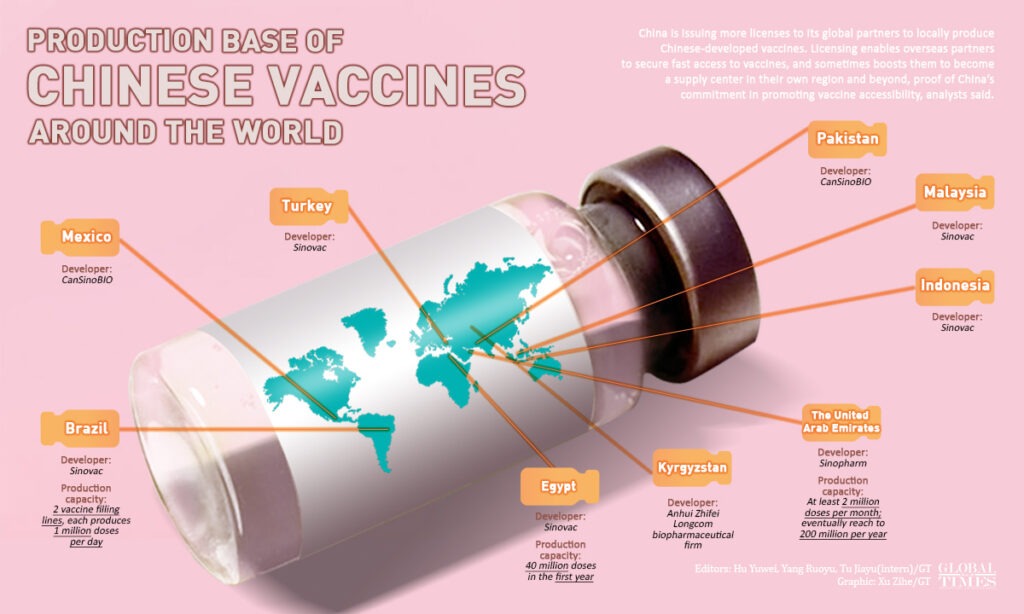 China is issuing more licenses to its global partners to locally produce Chinese-developed vaccines. Licensing enables overseas partners to secure fast access to vaccines, and sometimes boosts them to become a supply center in their own region and beyond, proof of China’s commitment in promoting vaccine accessibility, analysts said. ©: The Global Times

Brazil, another nation hit hard by the epidemic, is working to extend the manufacturing capacity upon “a huge demand” from domestic and neighboring countries, Brazilian Ambassador to China Paulo Estivallet de Mesquita told the Global Times in April.

Brazil’s state-owned Butantan Institute, Sinovac’s primary global partner in clinical trials, told the Global Times that it has launched two vaccine filling lines for the vaccine, each with the capacity to process 1 million doses per day. Butantan processes and packs the raw pulp of vaccines, the active pharmaceutical ingredient (API) imported from Sinovac, it said. A source close to Sinovac told the Global Times on Thursday that Brazil remains in a state of acute shortage of vaccine raw pulp, as the daily new confirmed cases in recent days remained above 70,000.

Most Latin American countries are still stuck in a dangerous surge of infections, a situation of filled intensive care units and record-hitting death tolls from Argentina to Colombia, media reported, quoting health experts that the region has the most urgent need for vaccines, while some developed countries hoard most available doses.

Partners in Mexico and Pakistan have all started full operation in producing China’s CanSinoBIO’s adenovirus vector COVID-19 vaccine via an exclusive production line in each country. There is no shortage of raw materials needed to manufacture the vaccines at present, CanSinoBIO told the Global Times, saying that doses are produced only for local use and will not be sent back to China. Through online training and offline technical guidance, CanSinoBIO has transferred its techniques in production and equipment use, and shared analysis methods and facility tips with local partners, the company said.

Mexico, a neighbor of the US, did not hear back from its request for vaccine assistance from the US until March 18 when the US nodded to give its surplus doses of the AstraZeneca vaccine with diplomatic strings attached to press for Mexico’s control over migrants coming to the border.

Also, Indonesia has increasingly relied on Sinovac’s vaccines, especially after delays in the arrival of AstraZeneca shots.

Central Asia also found the manufacturing plant for Chinese-made vaccine useful. Uzbekistan said on February 17 that it had decided to produce the recombinant protein COVID-19 vaccine from China’s Anhui Zhifei Longcom biopharmaceutical firm, but did not specify a specific schedule.

Typical cross-national production cooperation involves Chinese manufacturers doing the primary steps before vaccines can be handed over for sterile filling and finishing in partner plants overseas, with expert assistance and technical know-how given by Chinese teams.

An authorizing license can ensure overseas countries have enough domestic supply for mass use in a shorter time, and can make full use of local production manpower and resources, which largely reduces costs, Feng Duojia, president of the China Vaccine Industry Association, told the Global Times, noting that local drug regulators can also serve a responsible role in the process.

The financial gain for local countries from distributing vaccines to others is another bonus that boosts the local economy hit hard by the pandemic, said experts.

Some overseas production bases help ease China’s vaccine shortage in return, such as production plants in Mainz and Marburg, Germany, which are expected to offer their first batch of 100 million mRNA doses to China, once getting approval soon, via cooperation between Germany-based BioNTech and Shanghai-based Fosun Pharma. The Marburg manufacturing site – one of the largest mRNA bases globally – can reach an annual capacity of up to 1 billion doses to support further batches, BioNTech told the Global Times.

Though it promises many benefits in production licensing, challenges and risks remain in potential legal or commercial disputes, local quality control, transport capability, and even local political stability.

Delays in cross-border logistics can sometimes bog down the local production process. Reuters reported Brazil’s production of Sinovac vaccines was halted in May, as an expected shipment of raw materials awaits Chinese export clearance. Both the Butantan Institute and Sinovac did not respond to the Global Times’ request to clarify the reason of delay.