South-South Commonwealth Consultation Forges a Path to Peace and Development

11 December, London – Representatives of Commonwealth small states have initially identified key issues such as vulnerabilities and crisis derived from climate change, high crime rate, gun violence and illicit drug trade, as key peace and development challenges which should be tackled through a South-South initiative aiming to drive sustainable peace and inclusive development.

“The principles of South-South collaboration – horizontal exchange, ownership and non-conditionality, and solidarity – have always been hallmarks of the Commonwealth,” said Katalaina Sapolu, Director of Governance and Peace Directorate at the Commonwealth, in her opening remarks. “In a time of interesting global innovations and democratic challenges, South-South cooperation is an essential tool to enable more diverse opportunities and models for development, and create spaces for innovative solutions.” 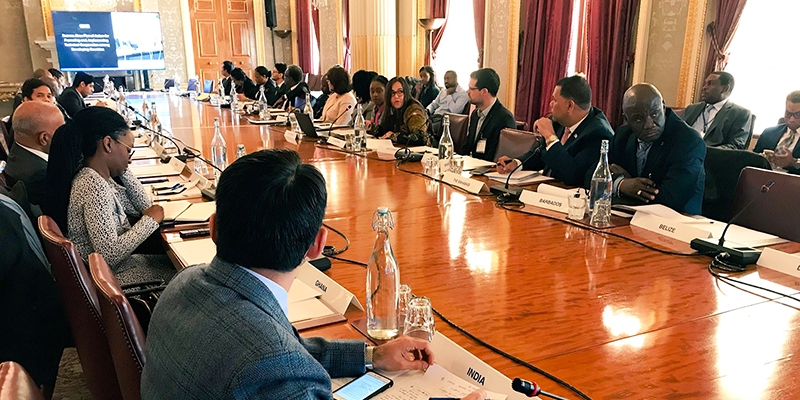 Meeting in London, delegates welcomed the initiative, Southern Solidarity for Sustainable Peace and Development in Small States, which is jointly managed by the Commonwealth Secretariat and United Nations Office for South-South Cooperation (UNOSSC).

The initiative seeks to strengthen South-South and triangular cooperation which refers to the exchange of knowledge and expertise between governments, organisations and individuals in developing countries from the Global South. It builds on the value of solidarity to promote a horizontal learning and mutual support among small states facing similar socio-political, economic and environmental challenges.

Delegates, including High Commissioners, shared their country-specific needs and challenges while also initially identifying good practices in the area of peace and development. Case studies include:

Jamaica’s High Commissioner, Seth George Ramocan, described crime and violence as a major impediment to economic growth which he said, “costs Jamaica 4 per cent of its GDP”.

Focusing on climate change, delegates emphasized that most small states are reliant on tourism which is extremely vulnerable to natural disasters. They said one major storm could wipe out a country’s entire economy, which in turn displaces humans, increases the crime rate and hinders development. Many other examples of peace and development challenges were shared by the participants, showing a strong interest for the joint COMSEC-UNOSSC proposal in an area of work that has not received enough attention over the years.

“We want to work with small states to understand their conflict, insecurity and violence related challenges and listen to their priorities for positive change,” said Cecilia Milesi, UNOSSC Senior Advisor for South-South Cooperation on Peace and Development. “We can then create a platform which allows them to learn from other countries from the global South and implement better policies for inclusive peace.”

The discussion also focused on the limited human and natural resources, the role of young people in peacebuilding, technology and social cohesion, and an even accessibility of technology in rural and urban areas.

The next consultation will be held in New York on 15 January. The findings of both will feed into the initiative with an aim to develop demand-driven solutions to the challenges faced by small states. The demands, priorities and best practices, shared by delegates, will be published on the Commonwealth Innovation Hub and UNOSSC’s webportal and upcoming South-South Galaxy platform.