UNESCO participated in the 2018 Global South-South Development (GSSD) Expo, held at the UN in New York from 28-30 November, with the overarching theme of “Showcasing Institutions Supporting South-South Cooperation in preparation for the Second High-level United Nations Conference on South-South Cooperation (BAPA + 40).” During the Expo, UNESCO showcased its work to promote South-South and Triangular Cooperation, including with private sector partners, and identified potential partners for expanding our work in this area.

UNESCO’s dedicated publication South-South and Triangular Cooperation in Action was launched by the Director of UNESCO’s New York Office, Ms. Marie-Paule Roudil, during a special event organized with the UN Office for South-South Cooperation on 28 November. 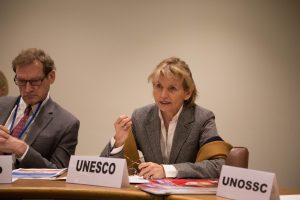 UNESCO also co-organized the High-level Panel and Thematic Solution Forum on Promoting Youth Entrepreneurship for SDGs with the UN Office for South-South Cooperation and UNV on 28 November. During this event, Mr. Laurent Mbosele Ndaywe (project officer, UNESCO Gabon) and Ms. Clare Stark (UNESCO’s South-South Cooperation focal point) showcased UNESCO’s private sector partnership with Artiel Gabon on “Train my Generation 5000.” UNESCO also showed a short film from the Minister of Small and Medium-Term Enterprises from Gabon, Ms Carmen Ndaot, who expressed the Government’s commitment to supporting a phase 2 of the project for 2019-2023. There is also a huge potential to scale up this project to Equatorial Guinea, Burkina Faso, Cameroon, Angola and Congo Brazzaville.

Ms. Clare Stark also participated in the high-level thematic solution forum on South-South and Triangular Cooperation in Sustaining Peace and Promoting Inclusive Development, and an inter-agency meeting on the preparations for BAPA+ 40. She also gave a short interview on the impressions of the Global South-South Development Expo at the request of UNOSSC, during which she also mentioned the Togo Biosphere Reserve project proposal that was recently accepted by India for funding of 1 million USD through the India-UN Development Partnership Fund for South-South Cooperation.

UNESCO will continue to actively work with partners to explore possible scale-up of its various South-South and Triangular cooperation projects, and present best practices through holding side events on the forthcoming BAPA+40 Conference, which will be held on 20-22 March 2019, Buenos Aires.